– Drink it fast, drink it slow, but your lips must touch the toe 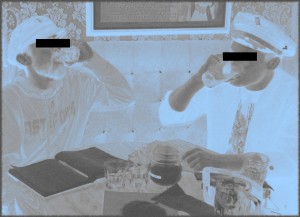 Strange beasts dwell in Dawson City and things that I am yet to fully understand go on here. I am troubled by some ill-defined feeling of connection to this place that teeters the brink of Arctic Canada. Some vague notion that what happens in Dawson keeps the rest of the world moving. The first cog in the machine, if you will. I look down at the severed toe in my whiskey and resolve to return to Dawson City someday. There is something here, some unknown quantity that merits further investigations. A weird energy that erodes barriers, imagines doors and takes a piss where you are supposed to wash your hands. I have important work to do in Dawson. Important work that concerns us all. But what? And why?

After two days driving Dempster Highway, arguably one of the worst and most dangerous roads in the world, my secretary and I both needed a drink badly. Rain ran rivers down the windscreen and we rolled long hills under heavy cloud. But there were blue skies over Dawson City and it was lit up gold like a beacon at the end of these dark Dempster afternoons.

Dawson was made famous as the epicentre of the Klondike Gold Rush. A mass migration began in 1896 when prospectors found rich gold deposits along the Klondike River, a repeated mispronunciation of the name Tr’ondëk. Aspiring prospectors made their way from Skagway, Alaska to the Yukon River, via the notorious Chilkoot Trail, a sub-arctic death march lined by the unidentified faces of the weak, partially buried in the snow. Those who survived the Chilkoot met a new failure in Dawson: there was fuck all gold. Most of it had gone by the time news of its discovery reached Seattle. It had all been for nothing. What little was left lay buried under the permafrost, a tomb too strong for the archaic extraction methods of the time.

Forget gold. Semi-organised crime pays. Every fucker and his mother was a thief, gangster and card shark. If you weren’t a bunko, you were a shill. If you weren’t a sharpie, you were a smoothie. Hustlers and hosers flim-flammed the flimps who gaffled the grifters. There may not have been much gold in the ground, but these were fertile lands for antiheroes, free-thinkers and brazen nutjobs such as Soapy Smith, Jack London and Scrooge McDuck.

We cross the Yukon River and absquatulate into the anonymous bustle of Dawson City. I’m speaking ironically, of course, as the bustle of Dawson City is, in fact, a hustle and the streets are deserted. We pass the SS Keno, biggest of all Klondike sternwheelers. A lifeline during the gold rush, now permanently docked in the Yukon River by Front Street. The beautifully decrepit skeleton of the old bank that employed Robert Service while he wrote ‘Ballads Of A Cheechako’ rots nearby on Front Street. I notice things. Weird things. Replicas. Replica banks, replica saloons, replica people. Is Dawson City just a museum?

Years ago, no-one can remember quite when, but it was definitely 1973, Captain Dick Stevenson was rummaging through an old abandoned cabin just outside of Dawson. Inside the cabin he found a jar containing a human toe suspended in pickling alcohol. The toe had been well preserved and he wondered what to do with this new found treasure as he wandered back into town. Then it hit him. It hit him like a ton of severed toes. The answer was obvious: put it in a shot of whiskey and serve it up at the Downtown Hotel. The Sourtoe Cocktail was born.

Captain Dick has since retired to Whitehorse, but the Sourtoe legend lives on. We sit down at the bar and order a pre-emptive round of Yukon Reds and before we know it Captain Dick II has signed us up for two Sourtoe Cocktails. The bar was already full of drunks eager to suck dead toe and things were starting to get a little rowdy.

Captain Dick II says that the original toe found by the original Captain Dick was swallowed long ago. Since then there have been a number of toes and one substitute black bear penis. The current toe belonged to a local trapper and was amputated due to frostbite around 20 years ago. I’m up next, he says.

A crowd has gathered. The rules are explained as my glass is primed with whiskey and dead body parts: “Drink it fast, drink it slow, but your lips must touch the toe”. Not being one for the limelight, I down my drink quickly and efficiently, ensuring clear lip-to-toe contact. Success. An easy victory in light of recent times. My secretary on the other hand, being the showboater that she is, downed her drink, pulled the putrid digit out of the glass and stuck it in her gob like a foul necrotic cigar. She began to lick the festering hallux up and down while waving her arms in the air as a disgusted groan rose from the audience. She basked in degenerate crapulence as surrounding stomachs inverted.

It was a beautiful scene. My secretary had redefined the evening. The party is over for those of a weaker disposition and those of stronger grit could never hope to match her heinous triumph tonight.

More beers as the Sourtoe crowd began to dissipate.

Eventually and inevitably, we were spilled out drunk across the streets of Dawson. Our boozy eyes had forgotten about the midnight sun and we blundered blind back to the car from whence we drove in a dangerous and reckless manner in the direction of what we presumed was Alaska. Nobody was hurt and no just laws were broken. 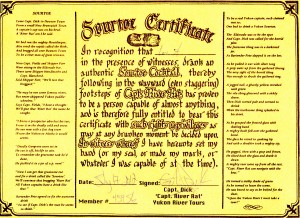