– A short dispatch from the edge of the world 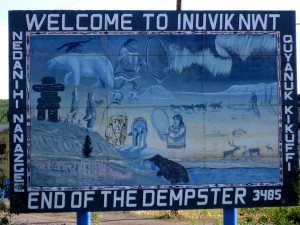 My secretary and I have been incarcerated in an Arctic gulag known as Inuvik in Canada’s Northwest Territories. We have been here for approximately six days or years; I cannot be sure since the sun does not set at this latitude.

Inuvik is a shit hole. There, I said it. You can hate me, but I will not apologise for the truth.

Inuvik is a grey clump of rectangle company town built upon a slab of permafrost 80 miles from the Arctic Ocean. A northern night terror, if only there were a night in the terror of Inuvik. And without night, there can be no dawn to our fear.

There is only one road to Inuvik and with good reason: no-one should ever go to Inuvik. But we were arrogant and defied the rules of self-preservation and drove the 500 miles of Dempster Highway into the Arctic Circle over two days, from Dawson City to Eagle Plains to Inuvik. Unknown to us at the time, a storm raged behind us, destroying part of the road and washing away the crossing at Peel River. There was no way back and an optimistic minimum of 500 miles of nothing in any given direction.

On the second or third day of our imprisonment, the local authorities announced that the town’s water supply had been compromised and was no longer considered safe for human consumption. At the same time, Inuvik was plunged into an Arctic heat wave, with temperatures reaching the 40s. We were forced into perpetual intoxication by drinking only liquids obtained at Inuvik’s premier drunk tank, The Mad Trapper Pub. The band was made of vampires and we joined the locals in strange purging rituals and ceremonial violence and drank Mickey Slims as the sun didn’t go down over the Mackenzie Delta.

Everything they say about Inuvik is true: all men are drunk, all women have black eyes and the mosquitoes are the size of dogs. And despite what the locals will tell you, they all definitely ride polar bears to work.

No foundationed structure can be built on permafrost due to its constantly shifting surface and all housing in Inuvik is constructed on stilts free to move with the changes in the frozen ground. Water and sewage is carried through pipes in overground tunnels called utilidors.

Local humor has it that they run drinking water and sewage in the same pipes on alternating hours. What the residents of Inuvik don’t know is that this is, in fact, true. Petrochemical companies have run Inuvik since the 70s and feeding a town its own feces is standard operating procedure in the oil and gas industry.

All of which is very strange, since Gwich’in communities have inhabited this area at various points over the last thousand years and they never ended up eating their own shit.

The white man has a tendency to change things for the worse. 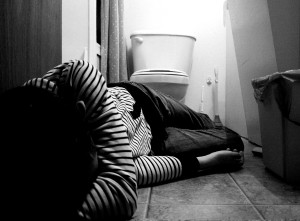