On the morning of April 20th 2016, I ventured down to Sunset Beach in Vancouver to join a vast ocean of bleary-eyed hipsters, reggae aficionados and undercover capitalists in sticking it to The Man by smoking a token quantity of the quasi-legal psychoactive substance known as marijuana.

Marijuana is not a drug I would partake in under normal circumstances, partly because it smells of urine and body odor, but mainly because it makes me weird and vomity. I am more of a krokodil kind of guy myself. But I am also a firm believer that The Truth is more important than The Facts. So, in the interest of good journalism, I decided to put aside my personal preferences, flex my sick trigger and join the celebrations on 420 Day.

April 20th, or 4/20 if you insist on writing calendar dates wrong, is essentially a temporary and limited government sanctioned suspension of federal drug policy and embrace of the increasingly impotent dictum of cannabis counterculture. What was supposed to be a day of protest over America’s war on drugs, Draconian legal systems, media hysteria and the tenacious hypocrisy of the so-called moral majority has boiled down to this: a middle class white man in a Rasta hat with googly eyes pretending to smoke a footlong sausage in front of me.

Yes, we were sticking it to The Man at Sunset Beach alright.

The active ingredient in marijuana (more commonly known as weed, pot, sexy jimjams or fuckruffles) is tetrahydrocannabinol or THC which mimics a naturally occurring neurotransmitter called anandamide and binds with cannabinoid receptors in the brain. This effectively creates neural pathways allowing access to functions of the brain and body that were previously unavailable.

As I crouched behind a bin overflowing with empty Starbucks coffee cups, rocking back and forth with my face between my knees, I couldn’t help but feel that something was very wrong. Maybe it was the sexy jimjams. Maybe it was too much reggae. Maybe it was experiencing time as a non-linear spatial dimension in which the past, present and future collide in a multiverse of alternate realities. But there was something I was missing, something that I wasn’t seeing.

Suddenly, a half full chai latte hit me in the back of the head sending approximately $3.40 and 120 calories worth of bad tea dribbling down the back of my neck. The empty cup rolled in front of me and I stared at the freakish green fish woman on the side.

Of course! It was Hitler’s birthday!

“I don’t know the real origin. I know myths and rumors. The first time I heard it? It was like a police code for ‘smoking in progress’ or something. What’s the real story?”

The official line on why we all get stoned on Hitler’s birthday used to be that 420 was California police radio code for a marijuana related incident, but this was too easy to verify. There is no 420 radio code and 420 in the California penal code refers to obstructing entry on public land.

There was another theory that 420 was the number of active ingredients in cannabis, but that one was too boring. Then Bob Marley died on April 20th, except that he died on May 11th, so that didn’t work out either.

The next story was about a group of kids in the 60s or 70s known as The Waldos who would meet after school at 4:20pm to look for a mythical field of weed. This had some tenuous connection to The Grateful Dead and it was as unlikely as it was unverifiable. It was as good a story as any of them so we called it Fact.

But the real reason we celebrate Hitler’s birthday on 420 is for reasons of misdirection, a clever sleight of hand designed to draw our attention away from the real menace: April 19th – the day once known as Patriots’ Day. A day that will be forever entrenched in its own grim history of violence. 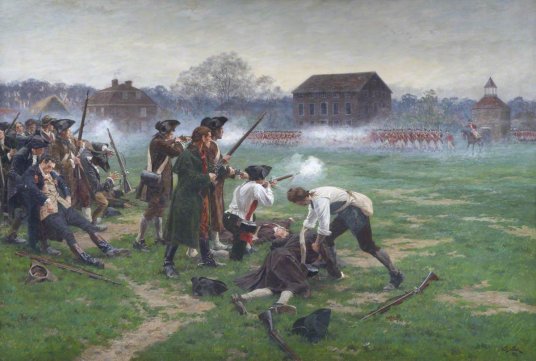 By the rude bridge that arched the flood,

Their flag to April’s breeze unfurled,

Here once the embattled farmers stood,

And fired the shot heard round the world.

The following is a brief history of April 19th:

April 19th 1775: Open armed conflict breaks out at the Battles of Lexington and Concord. The two battles between rebel Boston militias and British Redcoats would ignite the American Revolution, a war ultimately resulting in America’s independence and the collapse of the First British Empire. An estimated 115,000 lives are lost during the eight year conflict. The first skirmish at North Bridge would be immortalised as ‘the shot heard round the world’ by 19th century poet, patriot and unlikely namesake for a group of teenage Grateful Dead fans, Ralph Waldo Emerson.

April 19th 1861: The Sixth Massachusetts Militia arrive in Baltimore. Anti-war protesters attack the unit and the militia open fire, sparking the Baltimore Riot which leaves 16 dead and opens a schism between Unionists and Confederates that would begin the American Civil War. The Union would claim victory four years later, but it would be one which would cost over a million lives.

April 19th 1897: To commemorate the battles of Lexington and Concord and the Baltimore Riot, April 19th becomes known as Patriots’ Day – a day to celebrate ‘liberty and union’, two cornerstones of the American ideal, and the struggle and sacrifice necessary to preserve it. The event is marked by the first annual Boston Marathon.

April 19th 1985: The FBI and ATF lay siege to the compound of paramilitary white supremacists The Covenant, The Sword and the Arm of the Lord (CSA) in Elijah, Missouri. The armed standoff ultimately ends without bloodshed and several arrests are made, including CSA member Richard Wayne Snell, who is charged with two counts of murder and plotting to bomb the Alfred P. Murrah Federal Building in Oklahoma.

April 18th 1992: The day before Patriots’ Day it is reported, though not substantiated, that former US military engineer Randy Weaver fired shots at a helicopter passing over his property at Ruby Ridge in northern Idaho. The helicopter had been filming for trash TV presenter and journalist of questionable integrity, Geraldo Rivera, in what would become known as the Rivera Helicopter Incident.

Weaver had been involved in a string of disputes with the FBI, ATF, Secret Service, Boundary County sheriff department and US Marshals Service dating back several years. He had been approached by the FBI and asked to infiltrate and inform on the CSA prior to their April 19th 1985 Missouri compound raid. Weaver refused to co-operate and became ‘a person of interest’ to the FBI who initiated ‘Operation Northern Exposure’. Over the ensuing seven years Randy Weaver would be monitored, arrested without charge, interviewed, investigated and unsuccessfully indicted several times by various authorities.

Agent Bill Degan was shot by Kevin Harris, a friend of the Weaver family. Vicki Weaver was shot once in the head by an FBI sniper while holding their 10 month old baby Elisheba. 14 year old Sammy Weaver was shot in the back with a 9mm Colt submachine gun. Striker the dog was shot with an M16A1 military assault rifle before being crushed under a National Guard armoured personnel carrier.

Randy Weaver and Kevin Harris are arrested after the siege and brought to trial. Both are acquitted of all charges against them.

April 19th 1993: 76 civilians are killed during the culmination of a 51 day siege of the Branch Davidian compound by the ATF, FBI and Texan National Guard just outside of Waco, Texas.

Led by David Koresh, the Branch Davidians were a fanatical offshoot of Seventh-day Adventists who believed in an impending apocalypse as a prelude to the Second Coming of Christ and a war against the Whore of Babylon. Koresh and the Branch Davidians had been accused of various firearms violations and child abuse and, although they were unquestionably weird, none of their crimes were ever proven.

The ATF harassed the group for almost a year, lending a perceived credence to Koresh’s deluded prophecies and justifying the paranoia of the Branch Davidians with actual and quantifiable persecution. There is only so far you can push a group of unstable religious doomsday fanatics before shots are fired and on February 28th, this is what happened.

51 days later the ATF ended the siege. One armored vehicle and two combat engineering vehicles equipped with battering rams were dispatched to flank the buildings and after six hours of assault, gunfire and several volleys of pyrotechnic tear gas rounds, the compound caught fire and collapsed, killing all but nine of the Branch Davidians who remained inside.

April 19th 1995: Timothy McVeigh loads 5000lb of ammonium nitrate and nitromethane into a rented Ryder truck and parks it in front of the Alfred P. Murrah Federal Building in Oklahoma City. Shortly after 9:00am a devastating explosion rips through the building, killing 168 and injuring 684 in what is the deadliest act of terrorism on US soil prior to the September 11 attacks.

The Oklahoma City bombing was a revenge attack, timed to coincide with the anniversary of Waco, Ruby Ridge and the revolutionary history of Patriots’ Day. Indeed, McVeigh saw himself as the ultimate patriot, a hero who would free the people from an American Dream gone wrong.

Timothy McVeigh had declared war on the US government, an institution he perceived as tyrannical, oppressive, morally bankrupt and murderous. The Patriot Movement – an umbrella term that sought to legitimise everything from hard conservatism to white supremacist groups and paramilitary militias, had surged during the early 1990s and it was estimated that a peak of 858 independent militias existed in 1996. McVeigh hoped the Oklahoma City bombing would unite these factions and trigger a revolution that would overthrow the American government.

April 19th 1995: The day once known as Patriots’ Day is dubbed Militia Day in far right circles. April 19th is designated a day of empowerment for all Patriots, a reminder that a government should be subservient to its people rather than the other way around, and call to arms for anyone with a grudge. 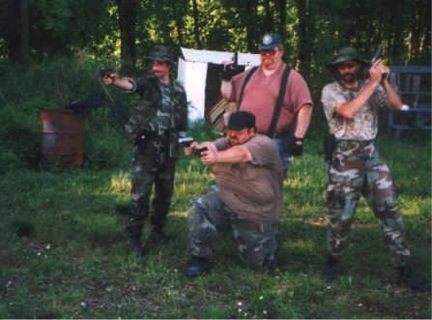 In conclusion, April 19th is a shitty and shameful day and one which the powers that be don’t want you to think too much about because it poses too many morally ambiguous questions:

Can one killer condemn another’s killing?

Is justice merely a righteous word for vengeance?

Can one really achieve unity through war and find liberty in the death of others?

No. It would be better if there were something to distract us from such concerns. Something decadent, but that can still retain a subtext of activism. Something like…

Nothing happens by accident in America. Everything that happens is allowed to happen by The Man. Justin Bieber didn’t become the most famous pixie in the universe because of his innate musical talent, Starbucks didn’t become one of the world’s biggest corporations because they brew great coffee and no-one smokes weed on April 20th because of The Waldos.

420 Day was given to us because it was deemed useful. It is a tool. It is not ours. We did not create it.

It’s all just a pantomime and there are good guys and there are bad guys and they all play a part. There must always be an antagonist to justify the protagonist. Those who have no consequence in the story become the audience, the Great Unwashed, the ones who cheer and boo when we are told to do so.

And in the unlikely event that one of the Great Unwashed should become aware of the true nature of their existence as spectator, they either become part of the pantomime or their voice is drowned out by the cheers and boos when the man on the internet did that funny thing.

… Which is why nobody will ever read this. And if they did, they will just shoot me full of krokodil, push me off a bridge and call me a cautionary tale.

Remember folks, you don’t have to choose a side.